It is impossible not to be drawn to the intense drama of a Browning poem. Infact, I have often thought that his poems like Fra Lippo Lippi or My Last Duchess or the dark and eerie Porphyia’s Lover can all be made into movies. There is enough passion, love, lust, anger and what not so cleverly woven into the dramatic monologues in which Browning excelled.

Let’s take a look at this master piece in which the speaker invites the guest to take a look at the portrait of his ex-wife, the duchess. Ironically, the visitor is some one who has brought with him another prospective alliance for the Duke.

Does the Duke sound shady, villianish to you?

(Lines 1-4) Notice how the Duke draws attention to the portrait of the duchess , ‘looking as if she were alive’. As you read on you will get to the reason for this cryptic comment. He goes on to complement the painter Fra Pandolf who worked hard over a day for the portrait.

(Lines 11-17) The quality of the painting is such that it requires attention and care so the Duke invites the visitor to take a seat. It is not an ordinary painting and the Duke emphasizes the Fra Pandolf whose name he says he took for a reason. When strangers meaning those who have not seen or met the duchess when she was alive, look to the Duke for further explanation when they see the intensity and passion in the eyes of the figure in the portrait. It is he pompously announces a rare privilege to catch a glimpse of the portrait to which he alone reserves the right to show it to others. (Lines 5-10)

Anticipating the question in the eyes of the visitor the Duke continues that he is not the first to ask so. It is says the Duke not his presence that of her her husband that made the Duchess blush so. The Duchess was easily pleased with the silliest of things. Even if Fra Pandolf made a causal comment that ‘the mantle is covering your wrist mam’, she might just as well go all red! Note the jealousy in the words of the Duke, who probably resented that his wife smiled at everyone. It is possible that the painter said that no paint can capture the color of her neck and it was enough for her to go crimson , added the Duke.

(Lines 18-32) She being naive could not understand that such compliments were often false or made simply out of courtesy and that she need not really take them to heart and respond in such an intimate manner. Her fault, a heart, too easy to please, she was inordinately happy with everything she saw or experienced and her eyes ‘went everywhere’. To her my love for her, the setting sun, the bunch of cherries some one gifted her, the white mule were all alike, equal and she rejoiced in everything as if it were all the same. The ease with which she bestowed her love and affection on all these silly things some how insulted the 900 year old name of the family which I gave her with the marriage. It was as if the name of my family of 900 years which I honored her with was equal to other unworthy things.

(Lines 33-46) Why would I stoop so low as to explain it to her that I did not like a few things about her? That this is too much in you and this too less. Maybe she would have changed. Yes, she smiled at me,but who was there not smiled at? This grew. I chose not to stoop. I gave commands and all smiles stopped together. Now, there is stands as if alive.

Lines (47-56) Would mind getting up? He politely inquires. We can meet the company below. I am sure my expectation of dowry will be met though of course, the company of the bride is what I hope to win. Please take a look at that bronze sculpture of Neptune, the lord of war taming a wild horse, it was custom made for me by Claus of Innsburk. Its a rare piece.

The Duke with his malevolent and dubious character unwittingly reveals too much about himself. He not only confesses to his crime of killing his ex-wife,the duchess but also places a direct threat to the incoming bride.

The drama and the eloquence the tightness of the verses which create suspense and drama is a Browning specialty, perhaps one he picked up from John Donne and his contemporaries.

his wife, one who is loving, generous and of a happy disposition?

The poem – My Last Duchess

That’s my last Duchess painted on the wall,
Looking as if she were alive. I call
That piece a wonder, now; Fra Pandolf’s hands
Worked busily a day, and there she stands.
Will’t please you sit and look at her? I said
“Fra Pandolf” by design, for never read
Strangers like you that pictured countenance,
The depth and passion of its earnest glance,
But to myself they turned (since none puts by
The curtain I have drawn for you, but I)
And seemed as they would ask me, if they durst,
How such a glance came there; so, not the first
Are you to turn and ask thus. Sir, ’twas not
Her husband’s presence only, called that spot
Of joy into the Duchess’ cheek; perhaps
Fra Pandolf chanced to say, “Her mantle laps
Over my lady’s wrist too much,” or “Paint
Must never hope to reproduce the faint
Half-flush that dies along her throat.” Such stuff
Was courtesy, she thought, and cause enough
For calling up that spot of joy. She had
A heart—how shall I say?— too soon made glad,
Too easily impressed; she liked whate’er
She looked on, and her looks went everywhere.
Sir, ’twas all one! My favour at her breast,
The dropping of the daylight in the West,
The bough of cherries some officious fool
Broke in the orchard for her, the white mule
She rode with round the terrace—all and each
Would draw from her alike the approving speech,
Or blush, at least. She thanked men—good! but thanked
Somehow—I know not how—as if she ranked
My gift of a nine-hundred-years-old name
With anybody’s gift. Who’d stoop to blame
This sort of trifling? Even had you skill
In speech—which I have not—to make your will
Quite clear to such an one, and say, “Just this
Or that in you disgusts me; here you miss,
Or there exceed the mark”—and if she let
Herself be lessoned so, nor plainly set
Her wits to yours, forsooth, and made excuse—
E’en then would be some stooping; and I choose
Never to stoop. Oh, sir, she smiled, no doubt,
Whene’er I passed her; but who passed without
Much the same smile? This grew; I gave commands;
Then all smiles stopped together. There she stands
As if alive. Will’t please you rise? We’ll meet
The company below, then. I repeat,
The Count your master’s known munificence
Is ample warrant that no just pretense
Of mine for dowry will be disallowed;
Though his fair daughter’s self, as I avowed
At starting, is my object. Nay, we’ll go
Together down, sir. Notice Neptune, though,
Taming a sea-horse, thought a rarity,
Which Claus of Innsbruck cast in bronze for me! 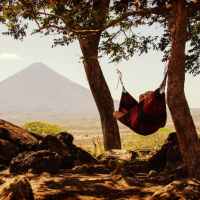